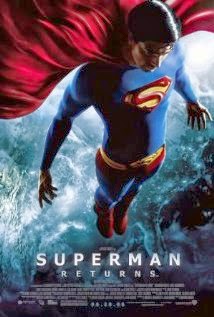 Whilst Batman Begins was being filmed Warner Bros sought to resurrect their other superhero franchise and bring Superman back to the big screen.  The project was called Superman:Flyby and the premise was a complex trilogy to make Superman dominate the cinema for the next ten years.  Playing with timelines and resurrection it's little surprise the story had JJ Abrams' fingerprints all over it.  Production meandered as the traditional problems with a Superman film reared their head; difficult casting, directors in and out whilst even choosing locations was difficult.  Abrams loitered as Warner Bros approached Bryan Singer whose idea of a returning Superman was approved when presented to Richard Donner.  Singer was a safe pair of hands having superhero experience with X-Men and the shining light of The Usual Suspects in his back catalogue.

The silly decision to cast Josh Hartnett as Superman was annulled amid typecasting and commitment fears.  The door opened for a pre-vegan Brandon Routh.  He certainly looked the part.  It's rumoured Kevin Spacey and Kate Bosworth signed on without reading a script whilst James Marsden began a quest to appear in as many superhero franchises as possible.  If they reboot The Green Lantern you know he'll be fishing around.

Routh is pretty darn good as Superman and as Clark Kent.  He manages to capture some of Reeve's charm as Kent without overdoing the goofiness and then step into the blue suit retaining a level of vulnerability that we haven't seen in previous Superman incarnations.  The main problem is the story he finds himself in.

Superman has been absent for five years, looking at the space debris of Krypton. Quite why is never really explained.  Neither is Kent's parallel absence.  He's been away 'finding himself' or something yet returns without so much as a suntan.  Verisimilitude goes so far but now it's got to the point that Lois Lane will only know if Clark Kent is Superman if it's announced via neon sign.  That rohypnol kiss back in the day was mighty powerful.  Maybe it's because Lois Lane now has a son, a son full of afflictions and weaknesses that he may as well have a neon sign that says 'Son of Superman.'  This brings worrying thoughts though.  When Supes and Lois got their freak on what stopped him getting carried away and blowing her head off?  Why was she so blase about shagging an alien? How defective are Lois' genes that they make the son of Superman so sickly?

Right, that's enough of that. Lex Luthor is trying his old real estate ploy again albeit with a twist.  Spacey looks like he's having immense fun as Luthor and hams it up darkly, changing wigs willy nilly whilst actually getting down to the nitty gritty of trying to fight Superman by levelling the playing field.  The Luthor trip to the Fortress of Solitude is inspired in it's villainy, matched only by the look on Spacey's face as he demands to learn everything from Jor-El and the Kryptonian crystals.  The inclusion of Brando as Jor-El takes us all the way back to 1978 and the supersaturated whiteness of Krypton.  It's comforting after Nuclear Man and the wilderness years.  Odd use of a model train set sees Luthor's real estate scam updated.  The only nagging doubt is just how he managed make a Kryptonite sheath for his island crystal.

Back to Superman, he's returned and had a beer with The Liability Formerly Known as Jimmy Olsen, but now what?  As Kent and as Superman he's alone, discarded.  The world has, seemingly, moved on.  The world doesn't need Superman anymore.  Or does it?  Handily, Luthor's model train set experiment has some aeronautical ramifications and affords Superman the opportunity to extol the virtues of air safety but ruin a ball game.  It's good, and quite the spectacle, but you can't help feeling that Superman Returns could have done with one more big set piece like this one.  The tumbling Daily Planet doesn't count.

It's clear that Superman Returns is a sequel and an homage to Donner's original Superman two parter but it's in this homage that sit jarring anachronisms.  Superman isn't really updated, it seems the only real updates have been rolling news channels and a ban on smoking in the workplace.  In this Internet age what would Kent really be doing in print media? And just who gets to walk back into a job after five years? Especially as he wasn't really any good.  It's lovely that Eva Marie Saint lives on the old Kent farm and plays Scrabble but in the city you'd expect a little more advancement even if the city is the misty eyed Metropolis.

Superman Returns is an OK film, not a great one and it did well enough at the box office to warrant a sequel.  Sadly, the studio and director would get distracted whilst the option on Routh's contract would expire.  It's telling that he's more remembered as Scott Pilgrim's confused vegan foe.
Posted by Unknown at 20:57