Return of the Bat

It's 1992 and the fledgling decade is shaking off it's inherited neon legwarmers and trying to work out if acid house will last in the mainstream.  Amongst the day-glo and smiley faces Warner Bros held a dark card. Thanks to grossing over $400 million 1989's Batman was always going to have a sequel.

Tim Burton returns to his Art Deco Gotham City and the strange mix of the stylised 1920s and 1980s is given a dusting of snow. Many of the ensemble cast return as Burton begins to display the trait of working with his favourites.  Hence the fleeting glimpse of Peewee Herman before the opening credits.  Obviously the biggest problem is following Nicholson's Joker.  Nicholson smiled wickedly as he chewed through the original's scenes and the only real way to follow him is with two Supervillains.  The comics are trawled and Catwoman and The Penguin are chosen.

The Penguin is, physically, one of the most recognisable of Batman's foes, even if he is basically a bit crap.  Burton and his team design a grotesque monster of a man, leaning heavily towards Victorian freak show and a hint of The Elephant Man.  This is reinforced by The Penguin's back up consisting of The Red Triangle Circus Gang who are just lacking a bearded lady.  There were few actors around who could possible fit The Penguin mould and Danny DeVito is an automatic choice.  To balance the Penguin's far fetched freak show is another villain; the manipulative businessman Max Shreck.  Played by Christopher Walken, Shreck is the connection between the underworld and more 'respectable' society.  Quite how a department store manager has become so powerful is left unanswered.  Perhaps Shreck is a little nudge towards Twin Peaks and Jerry Horne. 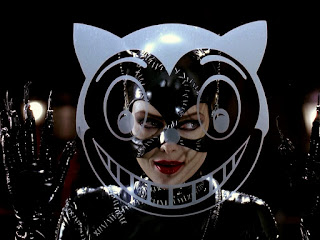 Catwoman presented a different challenge.  Readers of the comics will know that Catwoman isn't so much a villain but more an anti-hero, the lines further blurred by the affair with Batman as well as the 'real life' shenanigans between Bruce Wayne and Selina Kyle.  The camp flirtiness of the 60s TV series has been replaced and fetishised as a tormented Kyle discovers PVC and home tailoring.  A twist of fate saw Michelle Pfeiffer replace Annette Bening in the role. Very fortunate for Pfeiffer who negotiated a deal similar to Nicholson's for the original where he took a slice of the box office receipts.  Miss Orange County learnt a few things since Grease 2.  Not bad seeing that the rumour mill had her competing with Cher (?), Bridget Fonda and a rather determined Sean Young amongst others.

There's a sense of ambition about Batman Returns that was absent with Batman.  Where Batman is wholly built around The Joker and his set pieces Batman Returns has a more coherent story.  Despite problems with a writer's strike the story of The Penguin's revenge cut with Catwoman's attempts at discovery flow reasonably well.  As well as the Christmas setting there are other pseudo-religious undertones; Shreck's God Complex and The Penguin's grand plan all beginning with a Moses basket opening and a resurrection.  Okay, not resurrection as such, more feline CPR.  Burton's Batman universe is expanding and the first real tremblings of a cash cow for Warner Bros can be felt.

Yet whilst the storyline is more grandiose and the cast is bigger and heavier there have been trade offs.  Batman Returns feels very claustrophobic due to it almost entirely being filmed on a soundstage.  Location use is sparse.  The palette has been considerably darkened.  Although in keeping with the characters Gotham is now almost exclusively black and white, the only colour coming from the occasional splash of sewer green and a little pink from Selina Kyle.  Even the circus is practically monochrome.  I'm not sure if this was deliberate or a side effect of Warner Bros' secrecy. Perhaps it was a cut in costs, that would also explain Souixsie and the Banshees rather than Prince.  With regards to music it is, at times, almost unbearable. Elfman's score is overly loud, almost to the point of distraction and constant.

And so we seem to have mixed driving forces behind the film: an expansive idea and story constrained by odd budget choices as if the producers lost faith along the way.  We could have been presented with a wonderful film that would have made the Batman franchise a juggernaut.  Instead we have a good film that, unfortunately, contains all the tools that Schumacher will use to destroy the franchise from 1995 onwards. 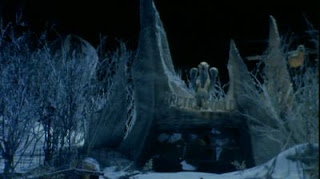 Burton does what Burton does, he juggles a band of misfits around inside a black snowglobe.  You just knew that sooner or later he'd get his hands on Alice In Wonderland.  Burton retains his cartoon feel whilst losing the animation that was present in Batman.  This is best seen as the Bat-boat homes in on The Penguin's mechanical duck.
All set amongst the impressive model work of Gotham Zoo.  The destruction of the zoo is more impressive than the Batwing's crash into the cathedral in Batman.

Naturally, I have compared Batman Returns to it's predecessor.  Technically, Batman Returns is a better, more complete film.  Although it does have flaws but these are only really looked at because the film didn't make as much money as Warner Bros wanted after Batman.  However, Batman may have punched above it's weight in a summer season devoid of superhero movies since the mid-80s.  Batman Returns should really be seen as the first modern superhero movie.  A little more faith in Burton's vision of Batman could've seen further sequels in this vein.  Instead, Batman Forever begins a long, camp death rattle that pretty much killed superhero movies until the 2000s.  You could argue that the DC films have never really recovered from Joel Schumacher if you compare their route with Marvel's Avengers franchise and it's build up especially when it was seen as a gamble for Warner Bros to let Nolan make Batman Begins.

Above all, Batman Returns is darkly gorgeous and a little under appreciated in my eyes, it contains the fledgling ideas that Batman is more than a man, an idea Christopher Nolan will hang his hat on.  For every bonkers giant emperor penguin pallbearer you have one of Catwoman's deaths and after all that fake snow has been swept up you have the knowledge that if this had been made in 1997 it would have starred Johnny Depp and Helena Bonham Carter.  Count yourself lucky.  Whilst Burton probably can't handle movies with big budgets and the associated expectations (see Mars Attacks!), Batman Returns is probably best summed up by Ty Burr in Entertainment Weekly; he wrote that "Yet for all the wintry weirdness, there's more going on under the surface of this movie than in the original. No wonder some people felt burned by Batman Returns: Tim Burton just may have created the first blockbuster art film."