George Lucas. You have wronged me. I'm not the first and I won't be the last but your constant desire to tinker with Star Wars has now become laughable.

I could handle the added extras and tinkering in the late 90s. I can just about accept the prequel trilogy despite their gakness. I can accept the bloated marketing and sheer market exploitation of the cartoons and toys but 3D?  3D is too much. A needless gimmick. I dread to think of Jar Jar Binks emerging from a twenty foot screen let alone a CGI enhanced Jabba flicking drool towards me and the less said about Luke Skywalkwer's mournful sulking the better. 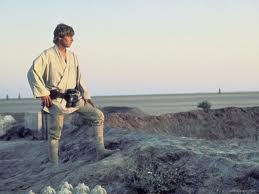 Apart from the now, consuming, hatred I am now feeling towards Lucas (I already loathe 20th Century Fox) I am left with one chilling thought. Lucas simply doesn't have any new ideas and so we will routinely be subjected to the rape of a classic until we're injecting liquid digital Star Wars into our tired veins.

I'll listen to a song until I'm sick of it. I'll tell the same joke until it's boring but I can come nowhere near the example Lucas is setting at flogging a dead horse. With a light sabre. Then going back and adding an extra torture scene. Then in 3D.  I find his lack of faith disturbing.

Now he's trying to defend himself. The shame

http://www.totalfilm.com/news/george-lucas-defends-star-wars-changes?utm_source=&utm_medium=&utm_campaign=
Posted by Unknown at 18:23 No comments:

The optimism of a lazy weekend

January sucks. We all know that. There's such a long wait til payday and it's too dark and cold for anything too meaningful to happen.


So some smart arse created Blue Monday, which we all know is a crock of shit. You would have thought that someone would create a New Order day for the right reasons, and preferably after a national Joy Division holiday.

Without actually realising the 'most depressing day of the year' was upon me I decided to have a lazy weekend. A lazy weekend with several aims in mind; the desire to recharge my batteries, save a bit of cash as I've got a weekend away at the end of January (badly planned for just before payday) and to catch up some college work.

My noble aims were almost thwarted by procrastination and the knowledge that James Bond films turned 50 this year but progress was made. Homework was all but completed and the pub was avoided. Whoever said staying in would save moolah was a fool. Either that or they were blissfully ignorant of Internet shopping and gambling.  I shopped and bought some damn classic movies on DVD and threw some cash at some horses, modestly successfully. All this must have contributed to a strange feeling at the back of my mind.

This strange feeling was difficult to pin down but even more difficult to ignore. 2011 was, on the whole a bit shit but now it occurred to me that this was a new year. Two weeks too late but I'm at the 2012 party now.

Without any knowing justification I look out at the rest of this fledgling year positively. It's not about the Olympics, Lord of the Rings Lego or even The Dark Knight Rises but I have a feeling that something splendidly lovely is going to happen in 2012. It's like a sneeze that's not quite ready. Something is itching to happen.

If only I knew what it was.


I hope this feeling lasts
Posted by Unknown at 19:16 No comments:

This is the one

Right then. OK. This is it. Let's go. I Tweet, I Facebook, I look blankly at Google + and I've started blogs before.

This time it will be different. I will make a concerted effort to maintain this blog regularly. Or semi regularly. I just need to find something to blog about. I could pick one specific theme or I might just pick things at random, but first, I'm off for a cup of tea
Posted by Unknown at 14:21 No comments: