They say you should never go back


The Seventies are here and so is James Bond's seventh big screen outing.

The good news (thanks to the studio, United Artists) is that Sean Connery has come back. It only cost a then record $1.25 million some of which was used for charity. Mr Kidd and Mr Wint are good too and Shirley's back on theme tune duties. That's. About. It.

Diamonds are Forever is horrifically camp which probably explains why Adam West was considered for the role and the storyline is peppered with just plain stupid elements.

To begin with Connery is unseen as he pursues old enemy Blofeld across the globe. Obviously still upset at Blofeld's murder of his wife, Bond is very determined popping up in Japan and Cairo amongst other places before a rather plump and sweaty Mr Connery locates Blofeld and his attempt to use mud to make himself a plastic surgeoned double. It looks like the years since Connery last picked up a Walther PPK have been good to him and have taken the edge of his ability to deliver a decently pithy one liner and he now keeps a mousetrap in his pocket. 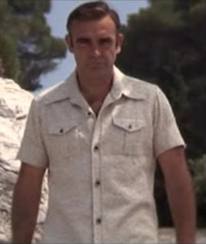 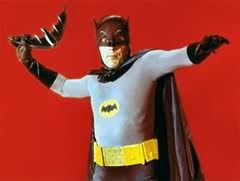 Sean Connery because he's not as camp as the other guy

Echoes of Goldfinger see a diamond smuggling scheme take centre stage early on. Several links of the smuggling chain are dispatched in entertaining ways from South Africa to Amsterdam. So far, so good but then the action shifts to Las Vegas. Gaudy and kitsch Vegas is home to elements that will plague the Bond series for much of the next decade. Tiffany Case and Plenty O'Toole are the early incarnations of Bond girls having daft names for the sake of it in an attempt at a euphemism. See also later, Dr Goodhead, Chu Mi and Jenny Fleck.  Don't even start on Bambi and Thumper. Just be glad Sgt J W Pepper hasn't reared his ugly head just yet.  In fact Las Vegas' image of all style and no substance is soaked into Diamonds Are Forever.

Whilst in Las Vegas Bond attempts to get to grips with the smuggling supply line by playing craps and taking in casino shows. His efforts culminate in a laboratory infiltration and posing as the greatly named Klaus Hergersheimer. When rumbled Bond escapes in a moon buggy. A moon buggy. Despite this Roger Moore still accepted the role. Following the moon buggy incident is the world's worst car chase. Twenty miles per hour around a car park.  Someone, somewhere thought this was a good idea. 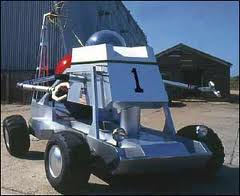 Before long Bond gets to the crux of the matter, only to find it's Charles Gray's Blofeld. Yes, Charles Gray, The Narrator who last had a knife stuck in his back in You Only Live Twice (his leg has also grown back). The crafty bastard now seemingly shed of his S.P.E.C.T.R.E is bent on using the smuggled diamonds in a laser toting satellite. As weapons go it's a bit crap. It's intense beam of diamond enhanced light makes things go red and wobble.  Needless to say Washington DC is on it's hitlist unless Blofeld gets his big bag of swag. Even Dr Evil wouldn't be this lame....

Bond pitches up at Blofeld's oil rig base in a zorbing ball. Blofeld is no longer worthy of a volcano lair and Bond is happy to roll around in inflated polythene rather than a sexy speed boat. Blofeld is defeated rather predictably and Bond gets to go cruising with Tiffany Case and dispatch Mr Wint and Mr Kidd with some brandy and a cheap thrill.

It's dispiriting that the best part of Diamonds Are Forever is Bond's conversation with a rat. 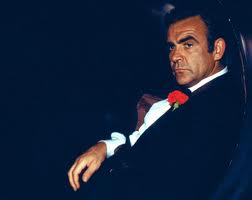 I am NEVER doing this again. Never. Never.

Diamonds Are Forever makes me feel uncomfortable. Our ruthless yet charming spy is being reduced to a stunt man smuggling cheap innuendo. It's as if Carry On Spying went viral. The only hope is that the next incumbent of the role will bring a fresh start. Hope can be cruel sometimes. Diamonds Are Forever proves the old adage that you should never go back.

James Bond will return and this time he'll be ginger.
Posted by Unknown at 02:41 No comments:

You took your time

We've been waiting for what seems like an eternity, but now we have GoldenEye.

Legal wrangles produced the longest gaps between Bond films so far. Understandably Mr Dalton got a bit bored waiting and so gave up the role and nearly ten years too late the producers got Pierce Brosnan. Pierce Brosnan with his improbably coiffured hair and impressive jawline in the role he was born to play. In the time since License To Kill the Berlin Wall has fallen and Communism with it. Bond has lost his old enemy so we wait with baited breath to see who will replace the Russians and their KGB. 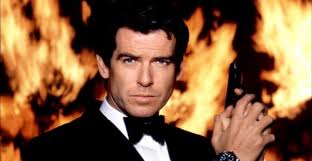 That hair will NOT move

This was the first Bond film I was old enough to see at the cinema. There is something quite magical about seeing the gun barrel intro on the big screen but something less wonderful about the cinema goers who mockingly applauded Bond's mastery of the small plane after blowing up the chemical plant.  GoldenEye's best feature is the way it draws on previous Bond films. Brosnan is the suavest Bond since Connery, he still pitches the odd one liner a la Moore (thankfully not as cringeworthy) and retains a little of Dalton's grit.  Balanced against the traditions of Moneypenny flirting and the comic asides of Q are some new elements. First and most obvious is the new M, Judi Dench is perfectly cast and perfectly reminiscent of Bernard Lee's M. It's good to see Bond getting the telling off he deserves every now and then.  Try and ignore the fact Bond has a BMW now, add in some relatively unknown actresses as Bond girls Simonova and Onatopp and some exotic locations and we're all set.

GoldenEye is essentially a revenge tale with a twist. An old MI6 colleague, Trevelyan, returns from the dead in an attempt to use a nuclear powered satellite (what else?) to initiate global financial meltdown and destroy the UK to avenge his parents.  Conveniently, Trevelyan will also get revenge on Bond who he blames for his facial disfigurement caused in the pre-credit sequence.  Ah yes, the credits.  The very credits which feature a girl who can deep throat a pistol.  In what I assume was a measure not to be too old fashioned the powers that be drafted in Tina Turner instead of Dame Shirley Bassey to belt out a Bono penned song. There are two things wrong with this. Firstly, it's a Bono song, it's a wonder his ego allowed him involvement. Secondly, I can't listen to any Tina Turner song without thinking of her 'dancing'.


Tina Turner should've taught Bono how to do this

Trevelyan is using renegade Soviet miltia to help him use the GoldenEye satellite to set off an EMP (remember Moore's explanation in A View to a Kill) to wipe out his emtying of every bank account he can lay his virtual hands on. He chooses Cuba as his base and so the hunt is on. After an altercation in a junkyard Brosnan finds himself bombing around St Petersburg in a tank to hunt Treveyan and save Simonova.

Despite an odd turn of events with a horse statue this is a very entertaining chase sequence (please ignore blatant product placement). It's no Bullitt but it's 100 times better than Connery in a car park in Diamonds are Forever. So we're off around the world again, destroying trains and squishing people with helicopters before a heavily choreographed fight inside Trevelyan's satellite's gearbox.

Sean Bean vs Pierce Brosnan in a good old fashioned fist fight is quite a good way for the villain to get his comeuppance. It's understated, no compressed air pellets, air locks or golden gunned duels.

Brosnan's debut was slick, entertaining and just the right thing to restart the Bond series after hiatus, let's hope it doesn't get silly in the future.

Bond has been substantially modernised.  GoldenEye was the first film in the series to use CGI. The franchise has been invigorated and hasn't gone too 'Hollywood' just yet, a good job then that John Woo turned down directing duties and the guest star roles haven't quite begun in earnest.

James Bond will return. Tomorrow or Today. Well, in the future and he'll have that bloody BMW too.

GoldenEye was supposed to have been filmed at Pinewood but production clashed with Connery's First Knight. Instead production was moved to Leavesden, near Watford, now the home of Harry Potter World. So, basically, Harry Potter in Watford is your fault Sean Connery. I'll forgive GoldenEye that due to the fact it spawned the best computer game EVER and the only reason anyone bought a Nintendo 64.
Posted by Unknown at 18:39 No comments: