Booze, Burning and The Black Sea

A day ago I returned from a week's holiday in Bulgaria.  I'll admit it, I'm a little the worse for wear but not as bad as I feared I would be given past experiences in Xanthi and Cyprus.

Bulgaria had been on the holiday radar for a couple of years: cheap, relatively hot and still relatively unknown. Hurrah! Chilled out evenings in a beach side bar without huge groups of pissed up Geordies fresh out of school!

Evening flights from the uninspiring North terminal at Gatwick meant a leisurely trip to the airport only dented by an inconsiderate Chrysler driver.  He was obviously on a mission to prove that it's not just BMW drivers that act like utter, utter cunts.
I like departure lounges.

The swindling and overpricing on a preflight pint is outshone by the perpetual daylight and the feeling that time doesn't really matter as much.  Weak will and a cheeky smile meant a preflight pint was followed by a double vodka necked as the realisation that our flight was boarding kicked in.
Holiday mode kicked in completely as we bought further overpriced booze on the flight over.  This was all compensation for having an air steward's crotch in my face for the safety demonstrations (a newly discovered peril of sitting in the front row.)  Unlike the, more than slightly, inebriated travellers on the return flight we were well behaved.

Warm muggy air hits you as you leave Bourgas arrivals.  It's one o'clock in the morning and still very warm, a tedious coach transfer was made bearable by a couple who didn't seem to know which hotel they were staying at getting on and off the coach repeatedly.  Maybe you had to be there.


Exploration of the area basically gives you an 8km beach lined with two almost parallel rows of hotels.  All of them huge.  This is an area that has been built with the express purpose of tourism.

Sunny Beach is the first place I've been to where the tourism feels manufactured, other places like Italy, Cyprus or Turkey the tourism has sort of evolved around history or natural features.  This is probably why there's a feeling of 1970s British seaside resort around the place; as if Skegness suddenly got sunny.  The beachside fairground complete with haunted house and mini rollercoaster just needs a Jurassic 3001 to complete the Clarence Pier look.
The air is heavy with the smell of waffles and doughnuts frying.  This place will be hellish at the height of the school holidays.

Obviously, the fairground wasn't of any real interest to us.  It was all about the beach and the nightlife.

The beach is lovely and sandy, fight for a decent patch of sand instead of trying to work out who you have to pay to rent a sun lounger.  Quite how big the Black Sea is is a bit of a mystery as you dip your toes.  Thankfully, the beach isn't overrun by jet skis and boats just a huge number of Russian and German tourists.  The evenings are for the pubs and bars.  Don't kid yourself thinking there's culture hidden next door to The Funny Pub, Guaba or the ubiquitous Irish pub.  Why is it that wherever you are in the world there's an Irish pub?  the organised bar crawl is one way to ensure you'll lose one day in bed with a vicious hangover.  Blame the 'vodka' it's called Flirt and is, quite simply, evil.  Don't believe the ads, you'll be too busy trying to remember your own name let alone do anything else.


It took me four days to remember I'd been in Candybar.

Behind all the hotels and the casinos seems to be a little resentment towards the tourists from Western Europe in spite of the boost we're giving to the economy.  It's almost as if the resort has expanded too quickly in too small a space.  The hints of Eastern Bloc still shine in the sunlight but soon they'll be swallowed up by the abundance of tattoo parlours and sex shops. 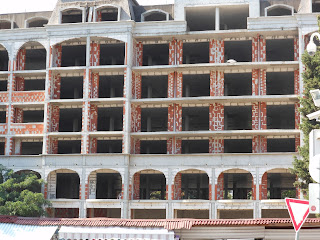 There did seem to be a fascination with tattoo shops and Angry Birds.  They are practically everywhere.  No sign of any From Russia With Love antics though.

I may have drunk my bodyweight in Kemenitza, got a little sunburnt and banged my head but Bulgaria is alright in my book, nice and relaxed but hectic when you want it to be.  I'm looking forward to visiting again.  There might be one supermarket I'm not allowed in though.

Hope Lies In The Proles

I was in my mid-teens in 1996 and just getting 'in' to music whilst hurtling towards GCSE exams and apparently growing up.  Britpop was in it's pomp and Oasis vs Blur was arguably one of the biggest things on the planet.  The bandwagon was big enough to share with the likes of menswe@r (who were great) and Kula Shaker whilst giving some much deserved exposure to Pulp, Elastica and Manic Street Preachers.

There were personalities everywhere; the warring oafish Gallaghers, the ever changing Albarn, the embodiment of geek chic in Jarvis but no one really came close to the fierce intelligence held by Wire and Edwards.  Nicky and Richey weren't happy to just be a bit clever and well read; it was a display.  It was a weapon against the mainstream and that's how a song alluding to Auschwitz got to number 2 in the UK charts.

The first single from Everything Must Go and since The Holy Bible and the events in February 1995 saw a change in tack.  Introspection and rebuilding linked with nostalgia and a redefinition of the band's identity to give A Design For Life.

My first exposure was the video.  Mistreated celluloid showing the band in the ruins of the Roundhouse and Nicky strutting around dressed as a Madchester relic.  The strings start gently and then the guitars but there is nothing that prepares you for the chorus.  Simple, repetitive and now anthemic if you listen to the NME, it was a call to arms; a 20th century 'workers of the world, unite!'  The Manics had reestablished their own socialist credentials whilst reminding us that we were still in the midst of class conflict.  It would be another year before the Labour landslide and hopes pinned on Tony Blair.

The song is so self aware, identifying the working class and yet screaming that we shouldn't be underestimated, hints of Orwell, Bacon and Marx all tied together with Blackwood and Welsh mining.  These are just a few of the reasons why I love this song, it's just unbelievable it was kept off the number 1 spot by Return of the Mack by Mark Morrison.