A View To A Kill was the first Bond film I can remember seeing. I was born smack in the middle of the Moore era and didn't really know what Bank Holidays were about until I was about seven. A View To A Kill remains arguably my favourite Bond film and this is mainly down to Christopher Walken. 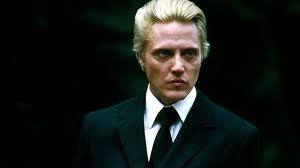 The story goes that David Bowie turned down the Zorin part. Walken was ace but you still have a little feeling of 'what if....' with Bowie's snub.  Walken has said he based his performance on Robert Shaw's Red Grant. Fair play to an American caring about a movie legacy. Walken is understated and menacing as the genetically engineered genius. You just wish he was in the movie a bit more.

OK, so A View To A Kill has it's bad points. The sodding Beach Boys and the iceberg submarine. Roger Moore spending a fair amount of time looking for his pension book on screen and the God awful fire engine sequence. Chuck in the fact that you can have a very easy game of 'Spot The Stunt Double' when Bond is engaged in mild action and you should have a Bond film that is worse than Moonraker (if possible)  But you don't, thanks to a reasonably sensible plot compared to other Moore jaunts, Patrick Macnee and some great set pieces on the Eiffel Tower and the Golden Gate Bridge.  Oh, and Duran Duran with the best Bond theme since Goldfinger.


So we go from retrieving a microchip in Siberia and a well utilised smoke flare to San Francisco via an odd horse doping set up in France and a detective named after a vegetable.  I, for one, was quite relieved Detective Aubergine was a very bit part.  Chuck in a solid job by David Yip as a helping CIA agent and a bizarre turn from Willoughby Gray as Hans Glaub and you can forgive them for casting Tanya Roberts and her throaty screaming in the lift shaft.  If only those petrol filled Bacardi bottles had hit her on the head.

Then there's Grace Jones.  Most people are still scared of Jones but Moore, well, ahem, Rogered her and did his standard sucky face kiss thing.  Hard to work out who was on more drugs, Pegasus the horse or Grace Jones. Mind you I'd run faster than Pegasus in that mine shaft if she was after me and I certainly wouldn't want Little Roger anywhere near me. 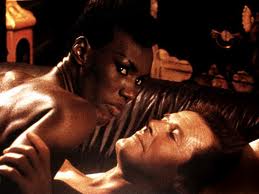 Why haven't they invented Viagra yet?

A View To A Kill is a fitting send off for Roger Moore, after the piss poor Octopussy the game had to be raised for fear of mortally wounding the franchise but it's almost a movie or two too late. the fight scene with Grandpa's ashes was almost exclusively carried out by Moore's stunt double. Roger probably had the day off for a prostate exam and a couple of big cigars. A bit worrying then that the tagline for this was 'Smooth Operator' describing a man seemingly crying out for a hip replacement.

The final scenes high up on the Golden Gate Bridge see the more youthful Walken fighting on a level of OAP. No punches but a bit of pushing and shoving with an axe. Zorin gives Bond a chance and pays for it by transforming into a shop mannequin as he plummets to the ocean. You don't technically see him die, in a Mr Big/Scaramanga kind of way, so maybe he was due to pop up again for revenge. We'll probably never know. 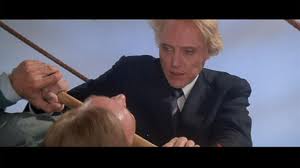 What we do know is that James Bond will return.

And this time he'll be Welsh.