I'll try not to be flippant about this, although that does tend to be my default position. But.

There, I said it.

I have been half my life.  I've hurt myself mentally and physically and have the scars to prove it.  This doesn't make me a depressive, it just means I have an illness. A treatable illness.  On and off for the better part of ten years I've been on various types of medication. Some helped, some didn't but the main thing is the medication now does to the extent that I'm coming off it.  My little companion in a blister pack right now is Citalopram. 20mg of the stuff in small, white tablet form taken once a day.  Much more beneficial than Fluoxetine for me.

Depression is an illness. Unfortunately, a damned annoying one. It's not like a virus or a broken leg so it can't be fixed with immunisation or a plaster cast. It can be controlled though and that's where I am right now. It's being controlled to the extent that I don't think about it.

My depression has varied in it's severity over the years and hasn't had a trigger or a predictable onset. For me it's an imbalance of chemicals in my brain. The chaotic lack of certain chemicals in my brain isn't anyone's fault and they mean that I don't feel the benefit of so called feelgood hormones when I should. So for me, SSRIs (Selective Seratonin Reuptake Inhibitors) help. I don't know how and I don't particularly need to know how. Just like most people who drive don't know the inner theories behind the internal combustion engine.


The hardest part of depression isn't the darkness in your head, the feeling of hopelessness or the lack of energy, sleep and appetite. The hardest part is frustration.  The frustration of being looked at like you're 'mental', the frustration of being misunderstood.  As someone who is depressed you get misunderstood by an awful lot of people, from friends and family to the doctors who you expect to help you.  That's why it's hard to tell other people, you don't want your friends to view you any differently and let's face it, it's not something you can slip into conversation with your boss.

My first experience of GPs was a bad one. I was young and having trouble sleeping. I was a teenager and so wasn't able to put a name to what I really felt. I was told to make sure I got enough exercise. What wonderful insight, you can't buy that knowledge! And so I descended into denial and ultimately got worse. The next trip to the GP was infinitely more successful, unfortunately for me, it happened a bit later than it should. In the meantime there had been a flirtation with overly heavy drinking and non prescription drugs. I was reaching out for something to help me cope in the absence of actually coping. I still do have a problem with alcohol. Eight years after major difficulties with the demon drink I still have to be careful. It wasn't alcoholism but it was close.

Depression didn't cost me friendships, jobs and help destroy relationships. It was my frustration at not being to adequately explain myself and the misunderstanding of the illness in general that did these things. I'm not being a victim, I being honest. I've managed to rebuild a lot of the bridges I strafed with napalm back then and am altogether much more 'level' than before.

The reason Depression Awareness Week is important is to help people is to get people talking about depression. Talking about it the only way to build understanding, remove stigma and help people recover and get on with their lives.

Throwing statistics and euphemisms at people won't work. We just have to talk about it.
Posted by Unknown at 20:50 No comments:

Moody Bond. This is my angry face.

Bond quits the service (properly this time) after Leiter gets munched on and Bond is pissed off. Very pissed off. 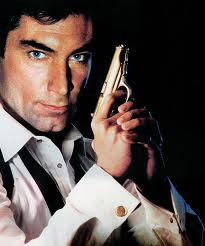 My name is Bond, Angry Bond

Leiter, who now works fighting against drug lords in Florida finally gets his man, the evil Sanchez, on his wedding day. Not bad for a bloke who seemingly hasn't aged since New Orleans and Live and Let Die. Unfortunately for Leiter, Sanchez is adept at bribing the polizei so gets sprung by Big Ed Hurley from Twin Peaks and sets about making him fish food. We'll neglect that this part of the storyline is lifted from the Live and Let Die novel shall we?

He disagreed with something that ate him


It's OK though as Timmy's come good in this one even if it's just because of the swearing.

OK, that's a bit unfair, but Licence to Kill is the first Bond to get a 15 rating and this can only have come from the 'shit' and 'bullshit' that litter the script. Having said that this is a much more grown up Bond film than we've seen in a long time despite the ill advised use of a stuffed swordfish and a nuclear powered electric eel. All but gone are the one liners and ridiculous set pieces as we're pumped up on vendetta. Although we do still get the obligatory yellow underwater vehicles.

Bond shows himself to be remarkably resourceful as he sets about getting his revenge by infiltrating Sanchez's organisation as he appears in full SCUBA gear without a blink to help him half hinch $5 million from Milton Krest. Bond picks up the strangely androgynous Pam Bouvier on the way to Isthmus City where a run in with some Hong Kong heavies gets him admitted to Sanchez's private circle.

It's here we see Bond discover Sanchez has developed away to dissolve cocaine in petrol to make it easier to smuggle. I dread to think of the price of a litre of 5* Plus, but it'll be a touch more than £1.48. In the background we have a very young Benicio del Toro, before he got his teeth done, a moonlighting Q, a bloke out of Die Hard and a very heavily made up TV evangelist.

No, I'm not Englebert Humperdinck

You'll never watch the God Channel in the same way again. Out the back of Holy Bonkers Town is Sanchez's drugs facility where he invites his clients for a tour before they stump up vast millions of dollars for petro-coke. Bond goes along for the ride and is issued with a little face mask. The little face mask is to protect the party from inhaling too much product and chatting shit at 40 mph for the rest of the film.

Bond's cunning disguise is soon rumbled by del Toro which leads to some good old fashioned arson to end Sanchez's operation before an unusually good chase involving oil tankers.  The tension is kept up before Sanchez goes stereotypical with a machete and Dalton gets to homage George Smiley with his present from Mr and Mrs Leiter. Sanchez meets with one of the franchises most unpleasant demises.  That'll teach him for trying to escape in such a crap car. Robert Davi based his performance on Casino Royale's Le Chiffre and stayed in character in true method acting style throughout. I wonder if he kept the lizard.

James Bond will return, after some boring legal tussles and an inordinate length of time. This time he'll be coiffured to perfection.
Posted by Unknown at 21:22 No comments: