Yeah, so, this happened.

My curiosity was pricked and a sense of wanting to know was awoken inside.  Thoughts began to circle closer to the 'Church.'

Yeah, like everyone, I'd heard about the tithing and the extortion, giggled at the aliens that apparently floated around and puzzled at how people could buy into it.  Then a thought hit me: wouldn't Christianity be treated almost exactly the same as Scientology if the Bible had surfaced in the 1950s?

So, I had a little rummage and came across the gateway to L. Ron Hubbard's 21st Century world and took the Oxford Capacity Analysis questionnaire.  Two hundred questions apparently designed to discover your personality.  Two hundred questions of varying degrees from the fairly superficial 'are you a slow eater?' to the downright odd 'do you browse through railway timetables for pleasure?' I've paraphrased and these are the only questions I really remember.  I wondered how my multiple-choiced answers to this type of question be able to fit together a picture of me.  Miles away my answers were being plotted onto a graph of my personality.

I'm naturally sceptical and expected the results to be less than positive yet still resolved to go and see what the fuss was about.  However, even as I exited Blackfriars tube and looked at the London Eye in the distance, I was in two minds.  Before I knew it Beck had shuffled onto my iPod and I was stood outside the flat facade of the Church of Scientology.  Plasma screens shine forward from between the marble-esque slabs and a revolving door is spinning as two girls in their mid-twenties enter. 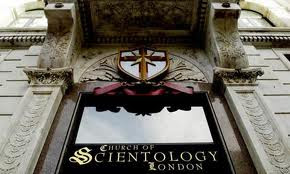 The interior is a cross between embassy and hotel foyer, with a hint of airport waiting area.  The staff are young and fairly serious looking.  I know I'm being paranoid but their looks were bordering on stares.  Announce your purpose and you're whisked away to another floor.  It's a tour now and my guide, named after a perfume, deposits me in the bookstore.  Straight into the sales pitch. Admirable, yet all I care about is that Hubbard has had his books translated into Latvian.  Banner posters laud how many books Hubbard has had published and, yawn, become bestsellers.  There can't be many books out there that haven't been on the New York Times Bestseller list.  I decline my first opportunity to purchase some of Hubbard's literal wares and am shipped off to 'The Exhibition'.  Not so much an exhibition but an extended bookstore, albeit with added DVDs and interactive plasma screens.  I am left to my own devices as my guide toddles off to fetch my test results.  I flick through video testimonials of Dianetics users and success stories of the Scientology purification diet, all strangely devoid of any specifics.  Time ticks away, quite a lot of time actually.  I begin to step away from the videos in case there is some subliminal message I'm being exposed to.  My guide still hasn't come back and I'm beginning to get bored.  Saving me from a propaganda film about Volunteer Ministers my guide returns and all the rumours of Scientology's evil schemes and omnipresence are reduced to a joke as I am informed that my test results can't be found.  Despite previous confirmation of results submission I have to sit the test again in good old fashioned pencil and paper style.  I console myself that the world won't be taken over by an organisation that's struggling with the Data Protection Act and a decent filing system.

I leave the other testees to complete as I am whisked away to glass walled box and then it begins.  My perfume guide begins to explain my results, naturally they're not good.  Her description of my personality (neatly categorised into ten points) is far from favourable.  The test shows me to be 'Unstable Dispersed,' 'Depressed' (although this bounces up and down, so I presume I'm now manic), 'Nervous,' 'Withdrawn' and despite scoring well within the ideal zone my positive scores in the fields of 'Inhibited' and 'Uncertainty' are also bad.  Well, bugger me, I'll get a free therapy session out of this. I try to suppress a little grin at the forlorn state of my life before the script kicks in.

My guide, now shifting to recruiter, has me in her tractor beam.  The interpretation of my scores leads her, via a fairly rigid sales script, to diagnose hidden traumas within my childhood.  Now it gets a little uncomfortable, despite my protestations that my childhood was fairly normal (I'm not saying anything about the lack of time I have for my family) she won't relent.  The back of my brain is flickering with memories of 'Quid Pro Quo,' a familiar voice is pushing itself to the front of my mind.  Almost verbatim Dr Hannibal Lecter is quoted.  I even went back to the film to double check.

That stare pushed me down and into the back of the seat.  It was difficult to resist but resist I did.  Her tone changed and became a little softer asking me what would be the one part of me I would wish to change.  Silence was not the required answer and so I was steamrolled straight into another sales pitch.  No, I didn't want a Dianetics DVD but I was cornered by a short course in self confidence.  My relentlessly being pushed into signing up and parting with a few quid seemed to be the goal and escape was made via a vague promise that I'd pick the phone up once I'd gotten home and checked my diary.  I can only assume that they've realised the phone number I submitted wasn't mine and I can only apologise to the person who they got through to.  Since I'd set foot in the building not one person had mentioned spiritual advancement, guidance or how to deal with Thetans.

In the space of just over thirty minutes I'd been targeted and converted from someone with a vague sense of curiosity into a cash cow in need of guidance.  Who knows, if they hadn't have gone in so hard they might have been a bit more successful but in the end this was a double glazing sales pitch gone feral.  Understandably, the Scientologists have got to pursue their audience a little harder than the older religions although I suspect they might be better off having a clear belief structure as a sales pitch instead of coming over as a tax efficient pyramid scheme.  It's interesting that spellchecker wants to change Scientologists to Syndicalists.  I'm happy to remain a Preclear, although I may well be a 'Suppressive Person' now, and might give the Mormons a poke next.