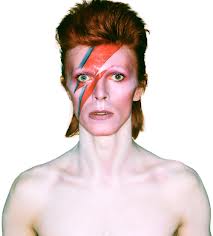 It'd been a while since I'd visited the V&A Museum with The Science and The British Museums holding arguably more appeal.

That was until they booked Bowie.  The tapping of fingers building as the calendar slowly worked it's way to the on sale date.  Not quite Glastonbury Sunday but there was certainly an air of gig ticket as slots at the exhibition filled up.  A couple of days in and weekends were booked solidly for months.  Omar Sharif and Tutankhamen at the O2 could only dream of this popularity.

With beautifully acquired tickets came the inexorable wait til 'the day'.  Time was joyously booked off work and coffee and muffins were arranged whilst neglecting the fact 'the day' clashed with school holidays.  Grit your teeth, get through it.  It's worth it.

The V&A is warmer than The British Museum despite being home to just as much marble.  Funnelled through the gift shop you're spat out onto the far side, sunshine pouring through from the courtyard, but you're early.  The queue is forming slowly as a guide adopts a Noah stance letting you pick up your audio guide two by two.

The steady stream of people pads upstairs, there are actually a few too many people. The nudges and shuffling irritate for a while, just as the almost (but not quite) achievement by Sennheiser on their audio guide does.  Stand in just the wrong spot and three soundtracks fight to be heard.  Before any of these inconveniences though is the Tokyo Pop vinyl suit.  Yamamoto's frankly ridiculous design straddles the entrance and you begin to get the feeling that this isn't so much an exhibition but a show.

On entering the exhibition you are met by a Gilbert and George video.  Looping as you stare at it trying to work out why it's been placed there ahead of a more obvious piece.  A little further round it clicks. This is an exhibition of how Bowie mixed art and performance, theatre and music to pretty much dominate two decades or so of the last century.

Hurtle through Bowie's formative years, see bands come and go and a steely resolve build; The Manish Boys and the Konrads as prototype Spiders. A Haddon Hall developed blueprint waiting for that little piece of luck to be made real.  J.G. Ballard, Lindsay Kemp and Pierrot jostle as influences alongside the idolised Chuck Berry and Elvis Presley before that little piece of luck sparks the touchpaper.  NASA's Space Program reaches it's ultimate goal and the BBC go for a gimmick.  Bowie gets his first big hit on the back of the wave to the future represented by Bill Anders' Earthrise photo.

Pick up the pace a little as in the distance you can hear snatches of Ziggy Stardust and Rebel Rebel.  Come within touching distance of Warhol just as the exhibition gets a little samey.  Bowie's penchant for graph paper and sometimes poor spelling filling the walls.  Then it hits you.

You're timing's a little off: you've caught that Top of the Pops performance of Starman at just the wrong time, or have you?  You've missed the chorus but now in a mirrored triangle Bowie is pointing at the camera.  He's breaking the fourth wall.  He's singing to you.  You.  Look past Somewhere Over The Rainbow, the (alarmingly small) jumpsuit and there's Ziggy draping his arm round Mick Ronson and upsetting the 1970s.  Such an innocuous move by today's standards makes you smile.  You wait for the video to loop round so you can catch it from the beginning and have that moment to yourself all over again.

Bound through the explosion of Ziggy and the excess of Aladdin Sane as stage wear and small things begin to occur to you.  There was a lot of smoking going on and I used to be able to get through forty a day.  Also, Bowie is tiny.  On TV and video he looks like he's some kind of elfin giant, a little emaciated by the cocaine but still huge.  Yet from his clothes and a well placed notebook you find that he's got a 26.5" waist and can't be more than 5' 9" or 10".  Was it all hairspray and platform shoes?  Freddie Buretti's ice blue suit imposes in the darkness and the Ashes to Ashes Pierrot juxtaposes the Thin White Duke ensemble starkly.  Cocaine, sequins, lipstick and cigarettes are everywhere but so is reinvention.  The evolution of the album artwork shows a constant desire to challenge perception of Bowie and to sometimes whitewash the past in order to start again.  The development of The Next Day and Scary Monsters... artwork exemplify this although I'd quite happily obscure the cover of Pin Ups.  You flick through the LP covers and skim through Paul Morley's hidden essays. A snatch of the verbalizer and diaries before the presence of Eno is felt.  Seeing the Oblique Strategy cards seems a little odd.  There is just so much information to process.  No wonder Bowie retreated to Berlin. 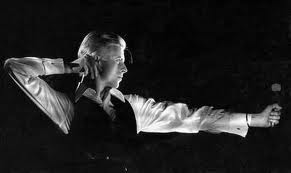 The Berlin section is where the exhibition comes into its own.  You can touch the walls of Thomas Newton's spaceship before everything becomes monochrome.  The binary feel of Berlin is accompanied by the starkness of Bowie's recuperation and creative explosion that gave us Low and Station to Station, Lodger and "Heroes".  The monochrome area invokes Kraftwerk and memories of when Iggy Pop nailed it and a probable peak before the bloated 80s of Serious Moonlight and Glass Spider.  Look at the stage model for the Serious Moonlight tour, it's pure distilled 80s, you can smell the peroxide and pastel coloured shoulder pads.


There's time for one last hurrah as the lure of the gift shop builds.  This comes in the form of Rock & Roll Suicide from the night Bowie killed the Spiders in Hammersmith.  The video is played on a screen that seems as big as a bus and you'll fight back a tear or two as Ziggy sashays across the stage for the last time.  It was about this time that a nearby mother was harangued by her teenage daughter.  The daughter complaining that Bowie dressed like a girl and all too skimpily. All the time bordered by more outfits ranging from Diamond Dogs to Glastonbury in 2000.  It's clear now that Bowie has kept absolutely everything and this is all just the tip of the iceberg.  The light is brighter now and you're near the end, content.

Try not to spend too much in the gift shop.